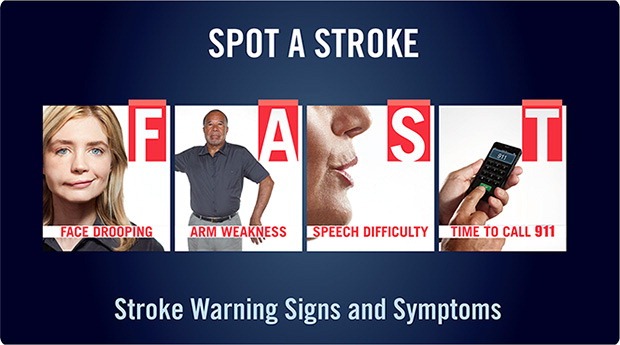 Every 40 seconds someone in the United States has a stroke (Go, et al., 2013; American Heart/Stroke Association, Inc www.StrokeAssociation.org).

The public is advised to dial 911 to get to the hospital immediately. Education has been provided extensively on the warning signs and symptoms, such as Spot A Stroke FAST.

However, once the patient is at the hospital, are steps being taken immediately to minimize post-stroke complications due to difficulty swallowing (dysphagia)? We need to share the “S” in FAST – think speech and swallowing!

This blog was inspired by the following #ASHA16 seminar:

See stroke references at the end of this blog which were provided by Dr Rogus-Pulia, of the University of Wisconsin-Madison & the William S. Middleton Memorial Veterans Hospital. This blog specifically addresses this article:

Dysphagia may be “one of the most life threatening complications” after a stroke, which could lead to adverse events such as pneumonia, malnutrition, dehydration, and mortality (Rogus-Pulia & Robbins, 2013). Literature reports a wide range of incidence of dysphagia after a stroke, but the reader must look at how the dysphagia was tested and identified. Screening techniques will yield the lowest percentages, as one cannot truly define dysphagia with a water screen alone. Formal bedside swallowing assessments by Speech-Language Pathologists (SLPs) may bring incidence up to 56% (Blackwell & Littlejohns, 2010). Videofluoroscopic swallow studies completed within a median of 10 days post-stroke onset showed dysphagia rates at 64% (82 out of 128 patients; confidence interval of 55-72%) (Mann & Hankey, 2001). Mann & Hankey’s findings are even on the conservative side, as some of their videofluoroscopic swallowing studies were done as late as 47 days post-onset (range: 0-47 days). Per a systematic review, the use of instrumental testing yielded incidence of post-stroke dysphagia as high as 64-78% (Martino, et al., 2005).

Per Dr Nicole Rogus-Pulia’s review, if there is dysphagia acutely post-stroke, then the person has worse outcomes, including a higher likelihood of mortality within the first 3 months and residing in a nursing home. Malnutrition and dehydration are also common as these patients may need modified diets and thickened liquids, which tend to contribute to decreased fluid intake (Finestone, 2000). Martino and colleagues (2005) pooled data from a small number of studies to find greater than a 3-fold increase in pneumonia risk in patients with dysphagia, and an 11-fold increase in pneumonia if the person is an aspirator.

We tend to focus solely on the cough as the main predictor of overall risk. You hear the nurse say: “He didn’t cough,” which does not necessarily mean no aspiration and no dysphagia. Holas, DePippo & Reding, 1994, found that the risk for pneumonia is 6 times greater if the person aspirates silently versus if he/she coughs in response to aspiration.

Since the early 2000’s, the stroke swallow screen has been one method to identify patients at risk. The swallow screen needs to be mandatory for ALL patients with stroke within the first 24 hours of admission and prior to ordering any food, liquid or medications by mouth (per the Department of Public Health (DPH), The Joint Commission, the Department of Veterans Affairs, and the Get With The Guidelines (GWTG) – Stroke program).

Let’s first think about the definition of a screen (per Dr Carnaby & Dr Cheril Canon at DRS 2016 – see prior blog):

to detect a problem or an undiagnosed issue in a normal or un-referred population.

It is important to use accurate semantics. What the nurse does and what DPH mandates is a swallow screen. It is not a dysphagia examination or a bedside swallowing evaluation, as these are terms used to describe the more extensive-formal assessment by a speech-language pathologist (SLP).

Semantic confusions aside, the biggest barrier to swallow screening may be making sure it is actually performed and done properly.

Swallow screens were only documented in 67.1% of the time in a large sample of 443,565 acute ischemic stroke patients from 1258 GWTG-Stroke hospitals from 2003 to 2009 (Masrur, et al., 2013). Masrur and colleagues uncovered the following factors that were associated with who received the screen:

It seems that patients who are older, more severe and critically ill received swallow screens more often. Is there a lack of education and training about screening at non-academic hospitals and/or in some parts of the country? Are hospitals adopting valid and reliable screening tools? (See TOR-BSST and prior blog on Dr Steven Leder and The Yale Swallow Protocol.)

Regardless of the tool itself, multi-site research has showed that facilities with formal swallow screening programs have lower rates of pneumonia (Hinchey, et al., 2005).

Staff may not screen because the patient is perceived as too high functioning to require a swallow screen. However, dysphagia and pneumonia can occur in patients with seemingly more mild symptoms.

Additionally, most swallow screens attempt to identify overt signs and symptoms of aspiration when drinking water. However, dysphagia is not only about aspiration. Mann, Hankey & Cameron, 2000, studied 128 patients with first-ever stroke and found that only 22% were aspirators, where as 64% were defined with dysphagia per videofluoroscopic evidence. Smithard and team, 1996, found that the presence of unsafe swallows (dysphagia) was a significant predictor of chest infection and mortality. Whereas, the presence of aspiration on a videofluoroscopic swallow study was NOT a significant predictor.

On the other hand, there are some patients who are at such a high risk for aspiration and dysphagia that they should not even be given the water drinking portion of the screening. It may be necessary to think about a bigger picture and not simply screen with water. Does your patient have a history of dysphagia? Is she already on thickened liquids at baseline? Does he already have a feeding tube? Does she already have a pneumonia? The exclusions section of your screening protocol may also account for decreased alertness and difficulty with secretion management.

What else could point to an increased risk? Let’s think about NIHSS severity, lesion location, and the need for formal evaluations by an SLP.

Rogus-Pulia noted in the #ASHA16 seminar that NIHSS scores of 10 or higher were found to be predictive of hospital-acquired pneumonia in acute stroke patients (Masrur, et al., 2013).

Could it be as easy as using the NIHSS score as a predictor for aspiration, dysphagia, and dysphagia-related aspiration pneumonia? Not necessarily. I recommend closely reading the Masrur, et al. article. Here is a bit of the complexity.

Masrur and team were unable to fully analyze the NIHSS score severity in the multivariable analysis due to 56% of the cases were missing the NIHSS data.

They analyzed 314,007 of the patients who were “eligible” for the dysphagia screen and had pneumonia data. The following are the patient characteristics associated with hospital-acquired pneumonia (HAP) with univariate analysis:

However, HAP also occurred in 3.9% of patients with NIHSS scores of 0-1. Masrur noted that only 11% of these seemingly “high functioning” patients were given a swallow screen.

While female gender, dyslipidemia, and hypertension were factors associated with lower risk for HAP, the multivariant analysis showed the following high risk predictors for HAP:

Are staff too often believing incomplete findings, such as: “he didn’t cough when I gave him a sip?”

Are some patients receiving screening with up to 3 ounces of water when they should have been excluded from this portion of the exam, placing them at risk for gross aspiration?

I wonder if some people who “pass” the screen may have actually had silent aspiration and dysphagia, which could lead to an aspiration pneumonia. Data on whether or not a person passed the swallow screen was not available in the Masrur study.

Additionally, there were no instrumental swallowing evaluation data included. Even the definition of a screen was faulty in the Masrur study, as they included any type of swallowing assessment (even formal evaluations by an SLP). Therefore, the presence of the “dysphagia screen” may have already incorrectly biased towards people with known dysphagia.

The location of the stroke is potentially one way to determine how cautious to be with oral intake. Lesion location was one of the risk factors for post-stroke dysphagia mentioned by Rogus-Pulia. The full list of risk factors discussed were:

The medical team needs to consider the lesion as a risk factor prior to ordering any food, liquid or medications by mouth. Rogus-Pulia reviewed the following lesion sites and types of strokes that can be predictive of dysphagia:

4. Seek the Expertise of the Speech-Language Pathologist (SLP)

Because it is common for someone with a stroke to have a delayed swallow, silent aspiration and more, the SLP may determine that an instrumental evaluation is necessary. The instrumental evaluation can rate the severity, identify aspiration and risks for aspiration, and determine the structural and physiological factors causing the swallowing deficit. The SLP can provide strategies, postures, and maneuvers to help the person swallow safely. The SLP can direct the person’s rehabilitation in an aggressive fashion to regain functioning as quickly as possible (Carnaby, Hankey & Pizzi, 2006).

What is needed to prevent complications from post-stroke dysphagia? The “S” in FAST needs to remind everyone to think about not only SPEECH, but also SWALLOW. Multidisciplinary efforts can immediately identify people at risk. Swallow screens should happen within the first 24 hours on all patients with stroke and should be based on standardized protocols. Additionally, screening protocols should have an exclusion section to prevent staff from giving up to 3 ounces of water to certain patients (i.e., someone with a baseline of dysphagia and already on thickened liquids or someone not even alert or managing secretions). The medical team could critically analyze the risks for people who are severely impaired (with NIHSS of over 10) and for those with lesion locations and types of strokes that can be predictive of dysphagia. Advanced age, impaired cognition, and multiple concurrent medical issues will also increase a person’s risk for post-stroke dysphagia.

There is still work to be done. Education and semantics may be big factors in why swallow screens are not done on 100% of acute stroke patients. This work needs to continue from the level of the individual hospitals all the way to The Joint Commission. Yes, The Joint Commission may be partially at fault for continuing the confusion around swallow screening. Their FAQ page has very confusing wording (under standards for “Advanced Disease-Specific Care Certification for Acute Stroke Ready Hospitals”). Take a look:

We are not asking nursing staff to perform an evaluation to characterize or rate the dysphagia. We are asking staff to screen the swallow in all patients admitted with stroke to see if problems may exist? If problems are detected or there is a suspicion of risk, then the person is referred for a dysphagia assessment (aka, Clinical Bedside Swallow Evaluation) by a speech-language pathologist (SLP). This will ensure access to comprehensive evaluations and aggressive therapy to achieve the best outcomes FAST (Carnaby, Hankey & Pizzi, 2006). 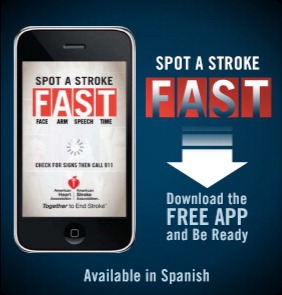