This blog is inspired by my own frustrations with different diet names across different institutions. Dysphagia ground, mechanically altered, mechanical soft, and chopped really mean the same thing?

This blog is also based on the following session at the ASHA convention in 2014:

Is this meal safe?

Diet safety is one of the most serious patient safety issues in our field, not to mention the impact on the patient’s quality of life. I have heard doctors order “soft” diets when they think they are ordering a pureed texture.

There have been sentinel events due to a patient receiving the wrong diet.

We have to be proactive members of the team to prevent meal tray inaccuracies and errors in diet orders.

However, how do we do this when there is so much confusion between the labels for solids and liquids? Steele noted: “no clear agreed upon taxonomy causes a clear risk to our patients.” Steele referred to the 1996 ADA Convention when 71 dietitians from 27 states responded to a survey about diet textures. They had 40 different labels for solid food textures and 18 different names for liquid viscosities!

What do we do when even the literature does not agree with practice?

Steele pointed out that Protocol 201 by Logemann, et al. (2008) & Robbins, et al. (2008) used 300 cps for Nectar thick and 3,000 cps for Honey thick. (Note: cps is also written as cP or centipoise,  and this is the same as mPa.s or millipascal.) One of the conclusions of Protocol 201 was that patients on “honey-thick liquid” had poorer outcomes than patients on nectar-thick liquid. However, honey-thick liquid, per the National Dysphagia Diet’s recommended ranges, is at a viscosity of 351 to 1750 cps. The honey thick Varibar product we now use for Modified Barium SwallowStudy.com is labeled at 1500 cps. (Per Bracco website regarding Varibar: “Thin Honey” EZ-EM #D121, has a measurement range of 800-1800 cps; whereas, “Varibar Honey” used in Protocol 201 measures between 2500-3500 cps). Was Protocol 201 really comparing Nectar thick to an almost Pudding thick liquid? This research has changed how we practice, making us want to recommend nectar thick liquid much more often than honey thick liquids. Was this shift in thinking based on research that tested with a honey consistency that was too thick?

Questions to ask ourselves during our evaluations:

Are we modifying the diet due oral factors or pharyngeal issues that we cannot see at the bedside? Are we modifying the diet based on physiological problems that we saw on an instrumental evaluation? Regular solids take more effort to chew, may cause fatigue, and may cause choking if the bolus is swallowed before adequate mastication and oral preparation to make the bolus swallow ready. Therefore, some diet modifications may be helpful, but “there is very little literature specifically about texture modified food used for the management of dysphagia,” per Steele.

According to Steele, there is evidence in literature that thickening liquid can help prevent aspiration of a thin liquid, but there is also evidence that there is a level that is “too thick.” There is also evidence that when technicians thicken by sight, the liquid tends to be thicker than the target. If we thicken the bolus too much, and the patient has significant pharyngeal dysphagia, are we causing increased pharyngeal residue? We do not know the answer to this question if we are recommending a thickened liquid based on a bedside swallowing evaluation without an instrumental exam.

Some pureed textures may also be too thick and sticky. Steele noted that if we adequately masticate and prepare a solid bolus until it is “swallow-ready,” what we send to the pharynx is quite similar in texture to a puree. (The exception is bread – keep reading.) I once had a patient in her 90’s who had significant trouble clearing a pureed bolus through her upper esophageal sphincter (UES) due to a chronic cricopharyngeal dysfunction; she said she would be the blender instead and pulverize the food in her mouth. This strategy plus her piecemeal swallows worked better than a pureed bolus swallowed all at once. However, we will not know what truly works unless we see it in action using an instrumental swallowing evaluation. 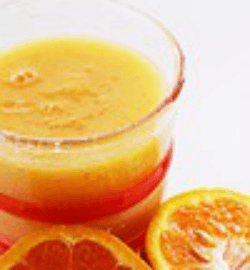 Is this a Honey-Thick Liquid?

And what about shear rates with LIQUIDS?

The shear stress that our tongue applies to a liquid bolus as it strips across the hard palate is a shearing force across the top of the bolus. The yield stress is how hard you have to push to get the flow to start. We apply pressure and cause deformation (which can change the shape of the bolus and make it spread out). The shear rate is the change of velocity as one layer of fluid passes over an adjacent fixed layer. The shear rate is noted in “reciprocal seconds” [1/s or s-1 suprascript].

This get’s a bit deep into Rheology. This is why we need Materials Science collaborators.

Here is a bit of what Steele discussed at the session:

She explained how there are zones in liquids that flow differently; for example, the liquid will meet resistance along the pharyngeal walls but flow faster in the center of the bolus. Liquid also moves slower when it is in a cup versus when it is being swallowed. Shear rates speed up off the tongue.

The flow characteristics really change when we start modifying them. Our blended smoothie may appear to be honey thick, but it can change to a thin liquid over time. We need to know if the fluid is a Newtonian or a Non-Newtonian fluid. Water is assumed to be Newtonian, but no fluid really fits this perfect mathematical model. Newtonian fluids would have a constant viscosity that does not depend on the stress or velocity. Many fluids we give to patients are non-Newtonian, and that is where our diet modifications get very tricky. For example, ketchup is a non-Newtonian fluid, as it becomes thinner at higher shear rates. 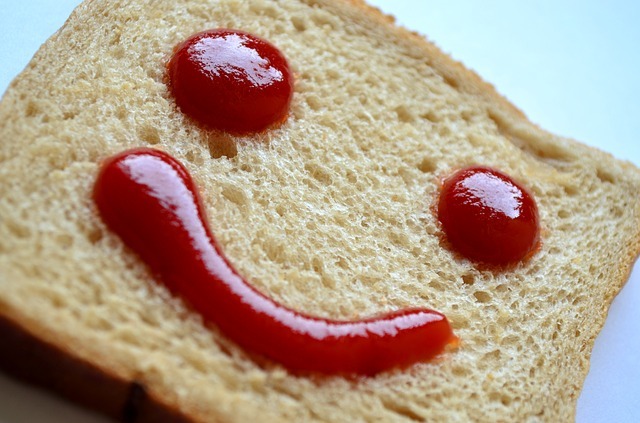 Ketchup is a Non-Newtonian Fluid

The bottom line, per Steele, is “we cannot compare the apparent viscosities of liquids that are quoted at different shear rates.” We cannot even compare Varibar Barium (with it’s reported viscosities at shear rates of 30 s-1) to other liquids the patient may consume. Steele noted that when Varibar Thin Barium is reconstituted to 40% it may actually be thicker (i.e., 10 mPa.s) versus water at 1 mPa.s. Are we getting false negatives on the Modified Barium SwallowStudy.com? 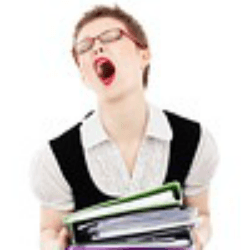 What factors should I consider with SOLIDS:

Is the bolus moist and cohesive or does it fracture under force?

Steele introduced a new term for me: Tribology. Thanks to Wikipedia, I am understanding this more. This materials science perspective makes a lot of sense for our analysis of solid textures and mastication. We are talking about spit and slipperiness, per Steele. This is the science of how surfaces interact in motion, using principles of friction (including adhesion and cohesion), lubrication, and wear. The wear (or effort of chewing) can be minimized by modifying the surface of properties of solids through the use of lubricants (per Wikipedia.org/wiki/tribology fundamentals).

SLP’s need to be aware of the science behind our dietary modifications when treating patients with dysphagia.

We need to know why we are recommending modifications.

We need to know that what we recommend has been standardized and analyzed thoroughly.

Not to mention, we need to thoroughly assess mastication and food oral processing.

The NDD was a project of the ADA with assistance from Speech-Language Pathologists and a food scientist (rheologist), but ASHA was not an official partner and never gave their support to NDD (ASHA has fully supported IDDSI and implementation across the US and Canada started in 2019). In my opinion, the NDD was the best thing out there at that time. See “IDDSI replaces NDD” on SwallowStudy.com under Dysphagia Resources and Patient Handouts on what IDDSI Diets have replaced the following NDD diets: Dysphagia Advanced, Dysphagia Mechanically Altered/Dysphagia Ground, and Dysphagia Puree.

HOWEVER, the NDD was meant to be a start, but the tweaking of the NDD has not happened yet, per Steele.

There is HOPE, but it will take a global village!

Dr Catriona Steele, from Toronto, and many others from around the world are advocating for an international consensus approach. They created IDDSI: International Dysphagia Diet Standardisation Initiative (www.iddsi.org) to standardize food and liquid levels. You can tell it is global with the different spelling of standardization!

Another goal of IDDSI is to choose labels that do not have implied meaning and are culturally sensitive. For example, I once had a doctor ask why I was suggesting to add “honey” to the diabetic patient’s liquid.

A global consensus, based on evidence, is coming soon.

Minimize risks for our patients.

And maybe answer a few of the food science questions! 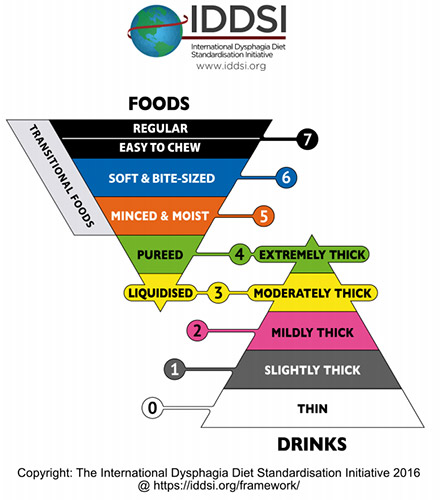