Will you or your patient be at risk for dysphagia after cervical spine surgery? I suggest reading this review of the following article:

Dysphagia after cervical spine surgery is a known complication, particularly with an anterior approach. However, I have not seen another discussion of the angle of the cervical spine as an explanation of the pathophysiology of the dysphagia. This article has fascinated me since it came out in the June 2013 Dysphagia journal. In this review, I’ll dive into the details of the research and make comments at the end.

The researchers wanted to find an explanation of why postoperative dysphagia occurs, especially if it is related to the O-C2 and C2-C7 angles. Is a change in angle (i.e., overcorrection of cervical lordosis) associated with an increased likelihood of dysphagia after cervical spine surgery?

They referred to Miyata, et al (2009) research that found oropharyngeal stenosis and dysphagia was due to O-C2 angle fixation in a flexed position. However, Miyata’s research was a small retrospective study of O-C2 posterior occipitocervical fusion with only 29 patient, and only 4 patients had dysphagia.

They also set out to determine the incidence/prevalence of dysphagia after anterior cervical (AC) discectomy with a Smith-Robinson approach versus the posterior cervical spine surgery (PC) with C4-C6 laminoplasty.

Tian and Yu studied 172 subjects in the AC group and 182 in the PC group (total of 354 patients). Patients were excluded if they were not available for follow-up. Patients were also excluded if they had preoperative dysphagia (per patient report only). All patients had surgery at the same institution by 5 trained orthopedic spine surgeons, and all had the same post-operative management. All patients in the AC group had anterior cervical plating with locking screws (AO, Synthes). All patients in the PC group had C4-C6 laminoplasty. It is not clear if the researchers interviewed the patients immediately post-op. However, researchers state that the presence and duration of dysphagia was noted only via interviewing face-to-face or over the telephone at 1 year after the procedure. This retrospective analysis was done by only one independent reviewer and included medical record reviews with verification by the patient. Unfortunately, no instrumental swallowing evaluations were included in the study design. Information was gathered in this subjective interview, and the severity of dysphagia was rated with the Bazaz grading system (Bazaz, et al, 2002):

Preoperative and postoperative plain lateral radiographs were taken under the same method and conditions by trained technicians. Angles measured: 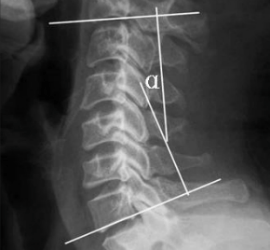 However, the researchers found a significant difference in the dC2-C7 (change in angle of C2-C7) in patients with dysphagia versus without dysphagia in the AC and PC groups. The logistic regression model was used, which showed that an increasing dC2-C7 angle is associated with an increased likelihood of dysphagia. Furthermore, when the dC2-C7 angle was >5 degrees, the likelihood of postoperative dysphagia was significantly greater than when the dC2-C7 was <5 degrees. In fact, all patients with long-term dysphagia (more than 2 years) had a dC2-C7 angle greater than 5 degrees. No relationship was found between the level of severity and a larger cervical lordosis.

The researchers referred again to Miyata et al. (2009), regarding the concern for narrowing in the oropharynx due to the O-C2 angle. Tian & Yu, in this study did not find a relationship between the changes in O-C2 angles and postoperative dysphagia. The two studies can’t be compared well, though, as they were different surgeries and different angle extremes.

However, it is a significant finding that with increasing dC2-C7 angles of greater than 5 degrees, patients will have an increased likelihood of developing postoperative dysphagia.

Researchers expressed concern that surgeons may enlarge the cervical lordosis too much in order to correct bad alignment.

Patients with larger dC2-C7 angles had a greater risk for dysphagia after cervical spine surgery.

Over-enlargement of cervical lordosis may cause:

This article has been flagged on my shelf for a while, but I needed to grab a mathematician friend for a review of angles to understand the 4-Line Cobb Method. This uses a quadrilateral shape to measure the theta (unknown angle). A quick literature review assured me that this is still the most common method, as it is the easiest way to measure the sagittal alignment of the cervical spine. However, some research cautions that the Cobb angles can underestimate lordosis. There is another technique called the Harrison Posterior Tangent Method which is not widely used, but can more accurately depict the cervical curvature.

When discussing dysphagia related to anterior cervical spine surgeries, there have been many risk factors and explanations, as listed above. Many of us have seen the prevertebral swelling and the anterior cervical plating bulging into the posterior pharyngeal wall on the lateral view of a Modified Barium Swallow Study (aka, video fluoroscopic swallow study). Even before you do the instrumental examination, you can see if prevertebral swelling is an issue on post-op lateral cervical x-ray images. Postoperative edema is common and can impair motility and sensation. It will be common for the patients to have reduced sensation of residue and aspiration in the days to weeks post-op. It is also easy to understand how nerve injury may happen, causing vocal cord paralysis and swallowing dysfunction, especially in an anterior approach. However, I had never seen a discussion of angles before in the dysphagia literature. It makes sense that a convex curvature of the cervical spine will jut out into the posterior pharynx. This may be similar to the mechanical and potential impingement on nerves that one may see with large cervical osteophytes (see this 2013 review article of dysphagia related to cervical spinal issues).

The convex curvature or angle may:

We think in terms of strength and timing, but we also need to think like a mathematician with angles. Maybe surgeons can measure these angles intraoperatively to avoid over-enlargement of cervical lordosis and prevent some postoperative dysphagia.

Limitations of the research:

The authors noted the limitations of a retrospective design, as well as the number of patients excluded due to lack of availability for follow-up (26 patients from the AC group and 38 from the PC group). Fortunately, they excluded patients with preoperative dysphagia; however, this was determined via interview alone. Overall, they may have severely underestimated the dysphagia in this population, as the incidence per subjective report was only 11% (both AC and PC groups). They noted how patient report of dysphagia may not have been a reliable study design. They did not mention why the telephone interview happened 1 year post surgery. In addition to this capturing only subjective complaints, they are unfortunately relying on the patient’s memory of specific difficulties with liquids and solids. When they stated that Otolaryngology evaluations and barium swallow studies could not be obtained for “most of the patients,” that left me thinking that maybe they have this data on some of the patients. A key exam here would be the Modified Barium SwallowStudy.com, making sure to visualize down to C7. The patient may need to be slightly oblique with left shoulder dropped down and back to ensure good visualization of C7 and the cervical esophagus.

The glaring issue with this research is the use of subjective telephone interviews and calling them “swallowing evaluations.” There was also the lack of clarity of timing. At one point, they state that mean follow-up time was 28 months (ranging from 12-48 months). However, under “data collection” section, they state the face-to-face or telephone questioning was performed at least 1 year after the procedure. I think they did immediate post-op interviewing, as they stated: “postoperative swallowing evaluation performed by telephone by asking about subjective swallowing complaints.”  The researchers later comment on long-term dysphagia of 2 years post, but do not mention on whom and how they did the two-year follow-up.

Clearly more research is needed into the change in angles of O-C2 and C2-C7 from pre-op to post-op. Research should use the latest and best methods to measure angles in a large scale prospective design, evaluating for dysphagia after cervical spine surgery using instrumental exams.

Citations in this review: