Do You Still Do Green & Blue Dye? 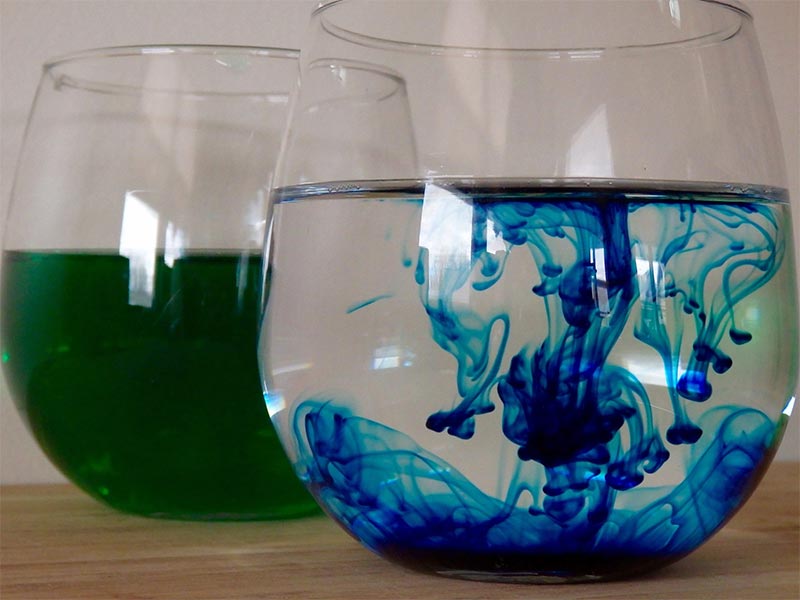 Do You Still Use Green & Blue Dye in

You may be using food coloring in your holiday cookie decorating.

In March, maybe you will have a green beer or two!

Your kids may have marveled at blue ketchup.

Here are my questions:

I realize that answers may vary widely.

Background on the dyes: Blue dye, aka FD&C Blue No.1, is a water-soluble dye that has FDA approval for an acceptable daily intake of 12.0 milligrams/kilogram body weight/day. Blue No.1 is also a main ingredient in “green dye” as well, combined with Yellow No.5.

Three historical uses for blue or green dye in medicine:

1. Blue dye in tube feeding of patients who are intubated or have a tracheostomy to visually detect pulmonary aspiration of tube feedings (i.e., 0.8 ml to 1.5 ml of blue dye per liter of formula, as studies have found this amount did not interfere with guac testing of fecal samples, per the methods used by Metheny, et al, 2002). Note: Per Brady (2005), the North American Summit on aspiration in critically ill patients recommended to discontinue the use of blue food coloring in tube feedings. Brady gave the reference of McClave, et al. (2002) for further reading on this consensus decision.

2. Modified Evans Blue Dye Test (MEBDT): The use of drops of dye to tinge secretions, foods and/or liquids when performing a bedside swallow evaluation on patients with tracheostomies, in hopes of visually detecting aspiration in tracheal secretions at the trach site or upon suctioning. The suction catheters are visually inspected immediately after the exam and monitored at intervals throughout the rest of the day. Testing procedures vary, with one protocol testing only one item per day in a patient otherwise NPO. Another protocol may be to place dye in all the foods and liquids tested during the bedside swallow exam. However, if the second protocol is used and a positive result of blue dye occurs, how would the clinician know which item may have been grossly aspirated? More on the reliability of MEBDT later!

3. Blue or green dye-tinged foods and liquids for better visualization of the solids and liquids tested during a Fiberoptic Endoscopic Evaluation of Swallowing (FEES).

I remember in September 2003 when the FDA issued their Public Health Advisory regarding the use of FD&C Blue No.1 in Enteral Feedings. At that time, the hospital where I worked banned the use of Blue No.1 across all procedures. The FDA stated that the following were not appropriate substitutes: green dye (as it contains Blue No.1) and methylene blue (due to the possibility of similar, if not increased toxicity risks, per FDA). Currently, some institutions have continued the use of blue and green dyes.

The FDA received 20 voluntarily reported cases of complications from systemic absorption of the dye, when blue dye had been added to critically ill patients’ tube feedings (use #1 above). Due to the voluntary nature of that reporting, it was impossible to calculate the level of risk to the general population. Some complications were of discolorations of the skin and bodily fluids, but more the serious complications were: refractory hypotension, metabolic acidosis, and 12 deaths.

The FDA cautioned that there may not be a direct causal relationship. However, 75% of the patients had sepsis before or during the episodes. This may indicate that patients with increased gut permeability may be at greater risk for systemic absorption of Blue No.1.

Per the FDA report and Maloney, et al., 2002, the following conditions can leave the patient at an increased risk for intestinal permeability:

The SLP may be only using very small amounts in the food or liquid during a MEBDT or FEES, but see Nancy Swigert’s 2003 ASHA Leader for her discussion with J.P. Maloney regarding how SLPs still need to use extreme caution. It should be restated that all adverse complications have been with the use of blue dye in the tube feedings. However, this does not prevent an additional concern of cross contamination of bacteria when the same non-sterile bottle of food coloring may be used across different patients.

Without the benefit of direct endoscopic visualization during a FEES, we have to question the assumption that the blue dye will be visualized upon tracheal suctioning alone. Over 15 years of research has questioned the reliability of this, and at best the MEBDT should be considered a screening tool only. However, why are we screening patient’s with tracheotomy tubes?

Metheny, et al (2002) studied the visibility of blue dye in tracheal secretions in intubated rabbits after three forced small-volume aspiration infusions through the endotracheal tube. The blue dye was only visible 46.3% of the time when analyzing 270 suctioned samples. The dye was the least visible after the 3rd direct infusion of blue-dye tinged tube feeding, at 27.8% accuracy. Blood in the secretions further reduced visibility, with the dye only visible 1.8% of the time in the presence of blood. They speculated that the visibility of the dye may be even less in humans, as humans secrete more mucous than rabbits following an event of aspiration causing pulmonary irritation. The use of higher concentrations of dye did not result in improved visibility. Overall, they concluded: “there appears to be little justification for its use.”

The main issue is being able to believe the results, and this was also noted by Nancy Swigert (2003) in The ASHA Leader and in her 2003 SIG 13 article. Susan Brady (2005) repeated this message in her SIG 13 article. (Search “Blue Dye” in ASHAwire). These review articles highlighted the two hallmark studies that changed our impression of the reliability of the blue dye test:

Both studies found a 50% false-negative rate for the detection of aspiration. Brady, et al. (1999) compared MEBDT to simultaneous modified barium swallow studies. Donzelli, et al. (2001) compared MEBDT to simultaneous nasal endoscopy, along with direct visualization of the subglottic region via an endoscope through the tracheostomy site. Both studies also indicated that the identification of aspiration is better if the patient grossly aspirates (i.e., >10% of the bolus) The MEBDT fails to identify trace aspiration.

The Brady (2005) review article also lists other studies, showing accuracies ranging from 38% to 79.3% when simultaneous instrumental exams are used with the MEBDT.

Based on the evidence, clinicians should use the MEBDT only as a screening tool – potentially to see if the patient is even ready to go to the radiology suite for a modified barium swallow study (videofluoroscopic swallow study). A positive result of blue dye means that the patient may be aspirating gross amounts; therefore, the clinician may consider giving the patient more time to recover. A negative MEBDT result should not indicate that a patient is safe to start oral intake. The patient could still be trace aspirating, but he/she may be ready to go for a modified barium swallow study or to have a FEES. The exam can be a useful tool to advocate for your patient’s readiness for further examination.

With testing only one consistency per day, and having the nurse and respiratory therapist monitor for green/blue in secretions throughout the day, this screening tool can be made as functional as possible. In the early 2000’s, prior to a hospital ban on blue dye, I had used this screening tool in the ICU to show that a patient was likely grossly aspirating (i.e., on secretions or on small amount of applesauce) and, thus, not ready for aggressive trials of oral intake. The medical team really listened to a positive sign of blue dye, rather than only my verbal caution of high risk. However, with the 2003 information from the FDA, this now may too much of a risky gamble, as many of those ICU patients will also have gut permeability issues from sepsis or critical illness.

Many SLPs have discontinued the use of blue and green food coloring, in favor of milk* and yellow pudding during the FEES studies. Others favor an instrumental exam rather than risking the 50% false-negative rate of the MEBDT. Brady (2005) recommended using blue dye only with patients who are not critically ill and using single serve commercially available blue products (i.e., blue sports drinks and jello).

*I have to note that milk, in addition to risk for allergy, has a relative viscosity slightly thicker than water. (Water has a viscosity of 1 centipoise and milk is around 10 centipoise at shear rate of 50 reciprocal seconds, per Dr Catriona Steele.) I wonder if diluted non-dairy milk would be better. Some facilities tinge the water with barium for increased visibility on a FEES, but barium on rare occasions can be constipating.

As noted by Leder & Sasaki, 2016 (see reference in prior blog called: Aspiration & Lessons from Steven Leder):

“We are of the strong opinion that all patients needing a tracheotomy tube require instrumental testing. Only endoscopy or videofluoroscopy can examine the upper airway, evaluate (pharyngeal and) laryngeal functioning, determine aspiration status, diagnose dysphagia, and recommend an appropriate oral diet.”

The speech-language pathologist should discuss the issue of green/blue dye with her/his facility to determine level of acceptable risks and to develop facility policies.

I look forward to comments.

Go to ASHAwire and search “blue dye” for the SIG 13 articles: