How Low Do You Go? Esophageal Dysphagia 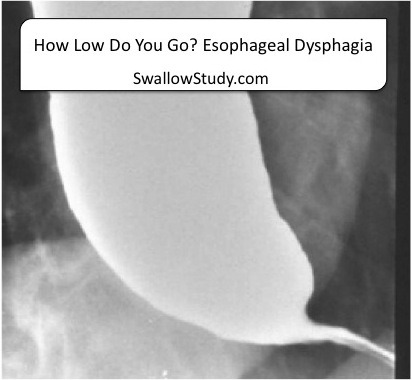 You do not diagnose what this is, but the SLP comments on bolus clearance. This barium is not clearing and could cause retrograde flow and aspiration.

This blog was inspired by: “Esophageal Screening: The Essential Last Step in Your Dysphagia Evaluation,” by Ashli O’Rourke, MD, April 13, 2014, at ASHA’s Health Care & Business Institute in Las Vegas, NV. It was particularly special to hear her perspective, because she started her career as an SLP and is now an Otolaryngologist specializing in adults with problems of the larynx and esophagus. She works at the Evelyn Trammell Institute for Voice and Swallowing at MUSC.

“We tend to stop at the cervical esophagus,” lamented Dr Ashli O’Rourke. “Esophageal dysphagia is this orphan out there.”

Let’s imagine a case: a man comes in for an outpatient Videofluoroscopic SwallowStudy.com (VFSS), aka, Modified Barium SwallowStudy.com (MBSS) with complaints that pills, breads and meats are getting stuck. He vaguely points to the suprasternal through retrosternal region. He is assessed in a lateral position to the level of the cervical esophagus with liquids, barium pudding and a cookie. His oropharyngeal phases are normal. No residue was seen in the pharynx to explain his problem. The report concludes that it must be a globus sensation. Have we really answered all his concerns? Have we even tested items that typically get stuck? If we did do an esophageal screen on our MBSS with liquids only, are we fully evaluating his problem?

Reasons to include the esophagus in your evaluation of swallowing:

“80% of esophageal disorders can be diagnosed by history alone,” per O’Rourke.

Again, WE are NOT the ones who diagnose, but with the time we spend on obtaining a thorough history, we can find clues to esophageal dysphagia.

8 Potential Clues to Esophageal Dysphagia on your Clinical Exam:

2. The stuck food eventually passes and/or passes with liquids.

4. Globus sensation. Have the patient point where.

6. Halitosis. Long-term stasis of food in the esophagus may cause bad breath.

7. Coughing well after the swallow or post-prandial coughing (after eating a meal)

1. Clues from a FEES/FEESST exam:

2. Clues from a MBSS with Esophageal Follow-Through:

Jou, et al (2009, section #5) stated: “In our normal cohort, semisolid boluses elicited significantly more stasis than liquid boluses. This suggests that a variety of barium product consistencies simulating food-like viscosities need to be used, in addition to traditional fluids, to fully evaluate esophageal transport with the videofluoroscopic esophagram. Our protocol included observations of esophageal motility with semisolid barium which has not been documented previously. Modification of the esophagram protocol may increase the sensitivity of detecting abnormal esophageal motility in those patients who are symptomatic.”

*Esophageal Clearance is component #17 on the MBSImP (Martin-Harris, et al., 2008). The clinician rates it as: 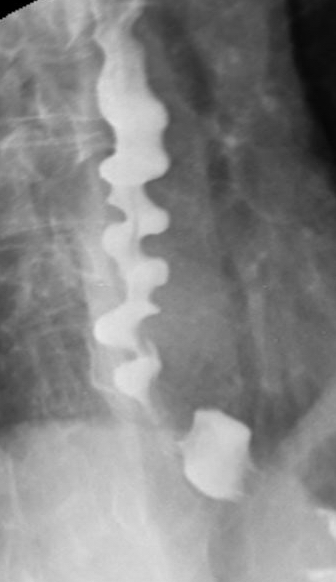 This would be an example of minimal to no clearance of the bolus.

Here is an excerpt from page 6 of the WGO Practice Guidelines for Dysphagia:

Most common causes of esophageal dysphagia:

1. Intraluminal foreign bodies (usually a cause of acute dysphagia)

I hope this blog is a useful resource on esophageal dysphagia. I have had a special place in my heart for the “orphaned” esophagus since beginning my practice as a Speech-Language Pathologist in 1995. This may be due to the influence of the midwest, studying at University of Wisconsin-Madison and discussing the esophagus with Dr Reza Shaker of Milwaukee. I have made observations with esophageal follow-throughs on Modified Barium Swallows Studies since 1999. Going forward, let there be no debate about whether or not the esophagus is in our scope of practice. It is a crucial part of the comprehensive swallowing evaluation. Let’s all make sure the esophagus is not the “orphaned” part of our patients’ bodies!

A brief and final word on HRM:

I would love to discuss HRM (High Resolution Manometry) further, but check out the 3rd issue discussed in this Dysphagia Research Society Annual Meeting review blog and the resource below. HRM presents the swallow pressures as a rainbow of colors to represent the pressures in the pharynx through the LES. With the addition of impedance testing (pressure exerted on the sensors by the bolus), we can “see” the bolus in purple! How did they know purple was my favorite color!

For a start, here is a link to the Park, et al (2014) article on High-Resolution Impedance Manometry that includes pictures and good references. https://www.ncbi.nlm.nih.gov/pmc/articles/PMC4204409/