These Pureed Meals (main dish, plus 2 sides and a dessert cup) are prepared by Mom’s Meals: Nourish Care with a team of food scientists, chefs and registered dietitians.

Please see my product review below, where I critically analyze 6 of the meals for appearance, texture, taste, and safety. Not all purees are created equal. I want to make sure the puree is tasty and easy to swallow for people who have difficulty swallowing.

No financial disclosures. I do not receive any commission on orders. I am reviewing this product to keep consumers well-informed.

I am specifically reviewing Gourmet Pureed since they support the National Foundation of Swallowing Disorders (NFOSD). NFOSD is helping people cope with the challenges of having difficulty swallowing (dysphagia). 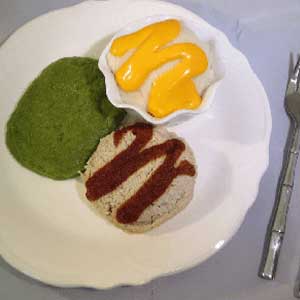 First, I’ll give you the pureed bottom-line:

Not all purees are created equal; however,

I can recommend both Smoothe Foods and Mom’s Meals. Check out the product reviews on Smoothe Foods. Read on to discover more about Mom’s Meals. My favorite Mom’s Meals: The Pork Patty with BBQ Sauce (for it’s true southern BBQ-style flavor) and the Roast Chicken meal (as the chicken and carrots make the meal). For breakfast, you can enjoy a pureed bread! I never would have believed it, but the French Toast with the Cinnamon Apples are smooth and easy to swallow.

Thank you George, of Gourmet Pureed (affiliate partner of Mom’s Meals), for sending me 6 different pureed meals to test.

These caused the biggest variability in ease of swallowing, with some being so sticky that the food got stuck to the roof of my mouth. However, the pasta was much smoother and more moist if I let the pasta dish sit covered for a while in between heating rounds. Here is what I did:

a. Pork: 8/10. My initial reaction: “No way, that is good!” The barbecue sauce was so good that there could have been more! The flavor may have been from the natural hickory smoke flavor and spices, but it does also have high fructose corn syrup. This pork was pureed carefully, without any chewing needed and no small chunks of meat or gristle (i.e., cartilage or inedible tissue in meat). The meat stayed smooth in the mouth. No effort to move around the ball of meat. Not stuck to the roof of my mouth. I ate the whole portion.

b. Cheesy Mashed Potatoes: 9/10. The added cheese sauce to the mashed potatoes made them easy to swallow. Did not get stuck on the roof of my mouth. It was so smooth and cohesive. I ate the whole portion.

c. Green Beans: 4/10. Appear more green than the green beans in other meals, which is good. They were moist and easy to swallow, but the buttery flavoring made me not want to eat them after 3 bites.

a. Roast Beef: 2/10. Some very large gristle pieces (i.e., the size of my pointer-finger nail). I found there to be 3 to 7 gristle pieces per teaspoon size bite. This is dangerous for someone with decreased sensation and awareness of small pieces. Some people may not have the ability to separate them and spit them out.

b. Mashed Potatoes: 7/10. Moist and smooth. I could taste the gravy. Easy to piecemeal swallow (swallow a little bit at a time).

c. Carrots: 9/10. The color, flavor and texture were perfect. Easy to swallow. No chewing necessary. The brown sugar glaze must have masked the “butter alternate.”

a. Meat Patty Loaf: <5/10. Strange pickle flavor. This meat also has the gristle pieces that need to be spit out.

b. Pasta & Cheese Sauce: 7/10. Pretty good flavor. Smooth texture. I compared this pasta directly to the Smoothe Food‘s Shells and Cheese. The Smoothe Food pasta item smelled better and tasted better than the pasta from Mom’s Meals, but the Mom’s Meals pasta had a smoother texture versus a slight graininess in the Smoothe Food item.

c. Green Beans: <3/10. “Not inedible, but I don’t like the butter flavor and paste flavor,” per my husband.

b. Mashed Potato: 5/10. This mashed potato was really sticky. I felt it was like a paste on my hard palate. It required at least 3 swallows to clear a small bite. “I don’t think that is a good one,” per my son.

c. Carrots: 8/10. My son tried this one too and said: “Taste like real carrots; like the real thing fresh out of the ground.”

d. Grean Beans: 3/10. We could only identify them as a green puree. The taste and the smell were vague and only slighty saying “green bean.” Again, the buttery flavor does not help.

b. Mashed Potato: 5/10. This mashed potato was really sticky. I felt it was like a paste on my hard palate. It required at least 3 swallows to clear a small bite. “I don’t think that is a good one,” per my son.

c. Carrots: 8/10. My son tried this one too and said: “Taste like real carrots; like the real thing fresh out of the ground.”

d. Grean Beans: 3/10. We could only identify them as a green puree. The taste and the smell were vague and only slighty saying “green bean.” Again, the buttery flavor does not help.

a. French Toast: 7/10. I was skeptical of a pureed bread! My son reported: “In the first place, it had to be chewed a lot, but it was not that sticky like the mashed potatoes.” My husband, who is an amazing cook, said: “actually, not bad!” This bread product benefited from letting it stand covered to steam and moisten. Otherwise, as it sat drying out, it did become more solid, requiring the rotary chewing. If it is not chewed it just gets stuck on the roof of the mouth. Syrup and/or the cinnamon apples are a must.

b. The Cinnamon Apples mixed with the French Toast: 9/10. There was plenty of this smooth and yummy apple puree to make the other items easier to swallow. My son said: “I don’t have to chew. I can just put my tongue against my palate and then rub.” My husband also added: “Good job blending flavors without making it overpowering with artificial flavor;” “I would eat that for breakfast;” and “For pureed food this is one of the better ones.”

c. Pork Breakfast Patty: 7/10. Smell was good. Flavor was pretty good. Thoughts on the spicing ranged from: “nicely spiced,” to “a little overly seasoned.” The cinnamon apples may help the overall appearance, as my son first thought: “cat food.” From a swallowing standpoint, it did require chewing. The texture was gritty or grainy, requiring a strong tongue sweep to clear it from the mouth.

Thank you for reading this review!
I want to make sure that people analyze any puree for safety before assuming that all purees are easy to swallow.
If your pureed food item at your hospital, nursing facility or home is dry and sticky, you could actually choke on it. It may get more stuck in your mouth and throat than a regular food item. Make sure it is moist and cohesive.

Play with your food & Evaluate:

Does it mash easily with a fork, staying moist and smooth? Does the liquidized puree slip through the tines of a fork? Does the typical pureed food pass the “Spoon Tilt Test,” by sliding easily off a spoon turned sideways? –> Eat and Enjoy
OR
Does it stick, clump, or crumble when you mash it with a fork? –> Try adding moisture, like sauce or gravy.
OR
Does it pick up in one dry-sticky-hard glob? –> Avoid due to choking risk!

Return To All Reviews